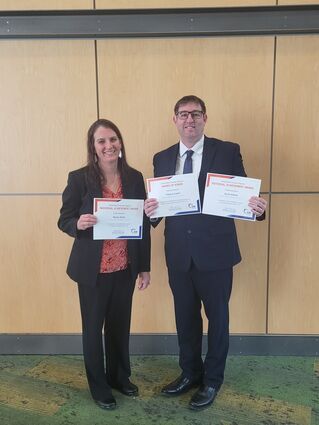 Attend ISBA Annual Conference: Two Hartley-Melvin-Sanborn Board of Education members, along with Superintendent Patrick Carlin, last week attended the Iowa School Board Association Annual Conference. Board members Kyle McCarter, Becky Stoltz and Carlin attended the conference for professional learning. Pictured here, Stoltz and Carlin hold the Better Boardmanship Award that was earned by Stoltz, Scott Vollink and Carlin for engaging in more than 100 hours of professional learning about school boards in the last year.

"The World's Greatest County Fair" lived up to its billing by winning 10 awards – including a coveted "Best of Division" Award – during the International Association of Fairs and Expositions (IAFE) 2022 Virtual Awards Show held last week.

The fair's first ever "Best of Division" Award, awarded for the best overall agricultural program in the division, was received for the inaugural FFA Day held on Sept. 13 at the 2022 fair. The 10 awards won by the fair were also the most awards won in a single year.

"These awards are all due to the hard work of our board of directors, staff, sponsors and partners, and volunteers," said Fair & Events Center CEO Jeremy Parsons in a news release. "It is an honor to receive this recognition from our peers in the fair industry."

The IAFE awards program allows member fairs to enter competitions based on competitive exhibits, agriculture, sponsorship, non-fair events, and communications. After submission, entries are judged based upon predetermined criteria set forth by IAFE committees. Judges include industry professionals both within, and outside of, the IAFE membership. For the awards program, the member fairs are split into five divisions based on attendance. The Clay County Fair competes in Division 3, which is limited to fairs across the globe with an attendance of 250,000-500,000.

Awards won by the Fair & Events Center were as follows:

With 1 in 8 children facing food insecurity, the Deb and Jeff Hansen Foundation and Iowa Select Farms are driving the change to help end childhood hunger.

Through the Power Snack program, Iowa Select Farms employees will be giving ham and bread coupons, along with pork sticks, to teachers and schools for distribution to their students. Among the schools selected was Clay Central/Everly Elementary

Select Farms employees distributed Power Snack Teacher Supply Kits to schools across Iowa Oct. 31-Nov. 17. In total, 112 schools and 21,150 students across 40 counties were recipients of the program. Power Snack helps reduce childhood hunger in Iowa by providing kids the means to purchase nutritious food to prepare at home. Four times throughout the school year, children identified by the school as food insecure receive an $8 coupon for deli ham and a $3 coupon for a loaf of whole wheat bread.

Bundles of 200 pork sticks were added by the foundation to each school delivery to provide a non-perishable, immediate infusion of protein for students, resulting in hunger relief and an open door to engagement in the classroom.

Hunters donated 4,183 deer hides to Elks Lodges across Iowa last year, which was a slight increase from the 2020-21 season. The deer hides are used by the Veterans Leather Program to make professionally-crafted leather gloves for veterans in wheelchairs and also turned into leather used for therapy programs for recovering veterans.

The Veterans Leather Program relies on the charity of hunters to donate their deer hides. Hunters willing to donate their hides are encouraged to contact the local Elks Lodge for drop off locations or visit http://www.elks.org/lodges to find the nearest lodge. The therapeutic kits and gloves are distributed at no cost to the veterans.