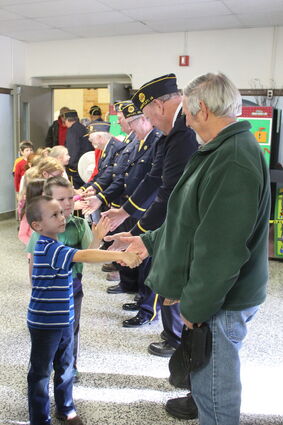 The public is invited to attend Hartley's Veterans Day program, which is slated for 9 a.m. at the H-M-S Events Center.

Command Sergeant Major Jeremy Ten Kley, a Hartley native, will give the keynote address during the program, which is slated for 9 a.m. in the H-M-S Events Center. The public is invited to attend.

Ten Kley enlisted in the Iowa Army National Guard in October of 1995 as a radio telephone operator in HHB 1-151st Field Artillery, in Storm Lake. He has earned numerous leadership honors and graduated from several military technical schools during his career. For the past three years, Ten Kley has been assigned as the Command Sergeant Major, 67th Maneuver Enhancement Brigade, Nebraska Army National Guard, headquartered in Lincoln, Neb. Prior senior leadership positions were based in Alaska, Kansas, South Dakota and Iowa.

Ten Kley recently returned home from a 10-month deployment with the 67th Maneuver Enhancement Brigade Headquarters, in support of Operation Freedom's Sentinel, while assigned as the Command Senior Enlisted Leader for the US Army Element-Horn of Africa and the Senior Enlisted Leader-Army for the Combined Joint Task Force – Horn of Africa, Camp Lemonnier, Djibouti, Africa. He was last deployed from 2003 to 2005 with Battery A, 2-130th Field Artillery, Kansas Army National Guard, in support of Operation Iraqi Freedom II, while assigned as a Section Chief for force protection and security operations for the Combined Joint Special Operations Task Force-Arabian Peninsula, Baghdad, Iraq.

Ten Kley holds several military honors and decorations. He is currently employed as a Special Agent with the United States Fish and Wildlife Service, Office of Law Enforcement. He has conducted law enforcement and investigative activities related to the unlawful commercialization and trafficking of state, federal, and internationally protected wildlife for the past 22 years; and has conducted joint investigations and provided training at CONUS and OCONUS locations including Alaska, Canada, and Africa.

Ten Kley, his wife Christy, and their four children currently reside near Hooper, Neb., where Christy is the director and head teacher at Happy Hearts of Immanuel Preschool. Their school-age children attend Logan View Schools.