'We're leaving here with a win'

H-M-S tops North Union, 46-31, in opening round of Class A playoffs 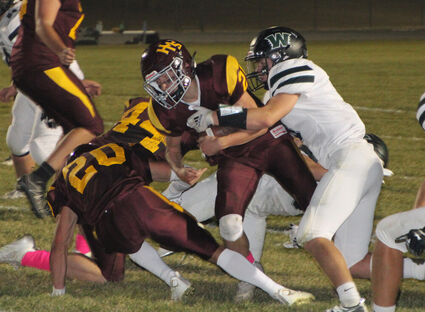 Aidan Espeland is about to cross the goal line on this successful two-point conversion attempt against North Union.

Either by design or necessity, Hartley-Melvin-Sanborn and North Union had one player whose performance in almost every phase dominated the action during a Class A playoff game Oct. 21 in Hartley.

North Union running back Bryer Prochniak rushed for 335 yards and scored four touchdowns, and passed for 46 yards and a score. Prochniak was second on his team in total tackles, and on special teams he returned four kickoffs and punted once.

But H-M-S had an answer in Kooper Ebel. The senior quarterback rushed for 307 yards on 32 carries and scored five times. He completed two passes for 33 yards,...