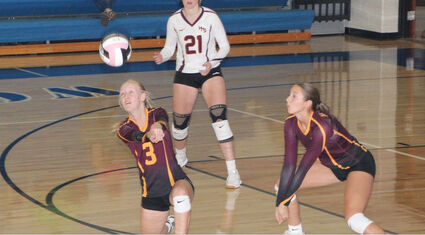 Elise Haack bumps the ball toward the opposite court. The senior had eight digs during H-M-S's sweep of H-LP.

After squeaking out close wins in the first two sets, Hartley-Melvin-Sanborn completed a sweep of Harris-Lake Park in War Eagle Conference volleyball play. The Hawks won the Oct. 4 match at Lake Park by scores of 25-22, 25-22 and 25-11.

After trailing early in the opening sets, H-M-S built what appeared to be comfortable leads. But the Wolves rallied to tie the score at 22-22 in the first set and narrowed the gap to two late in the second. The Hawks dominated the final set to wrap up the victory.

"It was good to get the win," said Hawk coach Cheryl Kroese. "We knew coming in we needed to be...