Making a statement in the standings 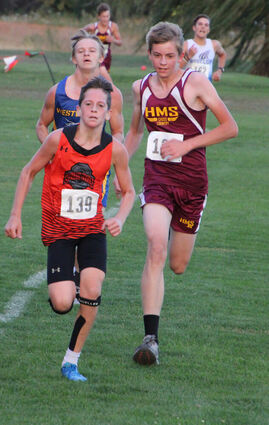 Damian Dodge (right) makes a move to overtake a Sheldon runner as he approaches the finish line at the South O'Brien meet.

Competing in their second races of the week, three Hartley-Melvin-Sanborn cross country runners finished in the Top 20 at the South O'Brien meet on Sept. 29.

Bryce Dodge led the Hawk boys with a 15th-place finish, running the course at Paullina in a time of 18:31. George Vargas was right behind, finishing 16th with a time of 18:34.

Sioux Central was the champion with 59 points, MMCRU was r...