Fields aflutter as local farmers get the grain 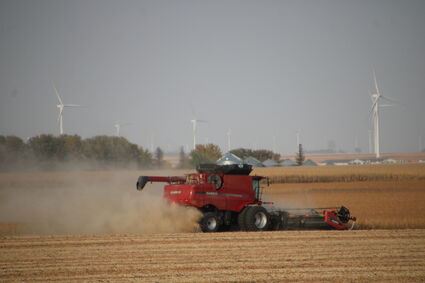 A soybean field gets harvested Monday afternoon northeast of Hartley on White Avenue.

A relatively ordinary harvest season is a good thing for local farmers, according to Growmark FS agronomist Alic Mohni.

"It's been a pretty uneventful," he said. "Some guys are pretty happy, some others maybe not so much. But there hasn't really been anything unexpected this fall."

Warm, dry weather has allowed local farmers to hit fields hard over the past two weeks. Mohni said most soybean fields around Hartley will be out by the weekend, with farmers soon shifting their focus to corn.

Mohni said soybean yields around Hartley have averaged between 55-65 bushels per acre. The further north...