Scoring in a variety of ways 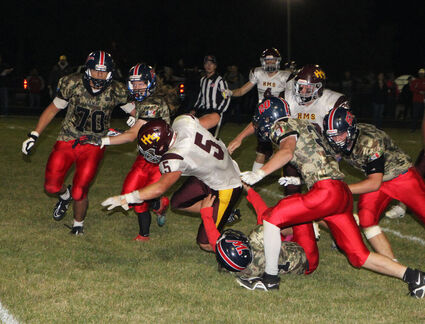 Travis Kamradt reaches for the goal line during an interception return deep in Alta-Aurelia territory. He would later score the Hawks' final touchdown of the game.

First impressions can be deceiving. Take for example Hartley-Melvin-Sanborn's offensive performance during its 51-16 win at Alta-Aurelia last Friday night.

Initially it didn't seem that the Hawks had any explosive plays. Even Hawk coach Jay Eilers thought the offense didn't dominate as it had in three previous Class A District 1 wins.

"No. 1, [Alta-Aurelia] took the big play away from us. We didn't have those 50, 60, 70 yard runs," he said following the game. "That's a compliment to the style of defense they played, the effort they played with and their tackling. They tackled very well."