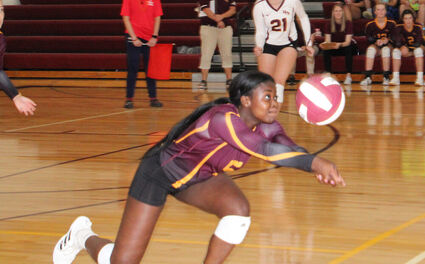 Emily Mutombo stretches to keep the ball in play during H-M-S's sweep of South O'Brien on Sept. 12.

Homecoming week at Hartley-Melvin-Sanborn got off to a rousing start with the volleyball team's 3-0 sweep of visiting South O'Brien on Sept. 12. The Hawks earned their second straight War Eagle Conference win by scores of 25-10, 25-19 and 25-21.

"Getting the sweep against South O'Brien was a great way to start Homecoming week," said Hawk coach Cheryl Kroese. "I definitely felt like some of the momentum from the West Sioux win carried over."

The Hawks dominated at the net, recording nearly twice as many kills [28-15] as the Wolverines. Elise Haack, Abby Kunzman and Kylee Schiphoff each had seven kills, and Abby Douma contributed four. Frankie Mohni put up 20 set assists.

Kunzman led the back row with 11 digs, Mohni had eight, Otto had seven, and Douma and Haack each had six.

"I'm proud of how these ladies come into practice each and every day and put forth quality effort," Kroese observed. "Wins don't just come from our attitude and effort on the night of the game. It comes in being consistent with it day in and day out."

The Hawks wrapped up Homecoming week with a big finish, winning three pool matches at the Graettinger-Terril/Ruthven-Ayrshire tournament on Sept. 17.

The Hawks put down 54 kills, led by Schiphoff with 19, Haack with 13, Douma and Kunzman with seven, and Eliza Tewes with five. Mohni added three kills along with 43 set assists for the day. 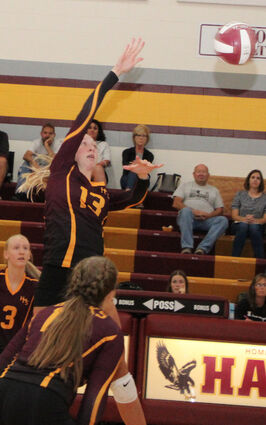 Abby Douma goes up for an attack against South O'Brien. She recorded four kills in H-M-S's 3-0 win.

The Hawks' 4-1 match record for the week evened their overall record at 6-6.

The Hawks return to War Eagle Conference play at Unity Christian on Sept. 27.