Hawks have it their way during Homecoming 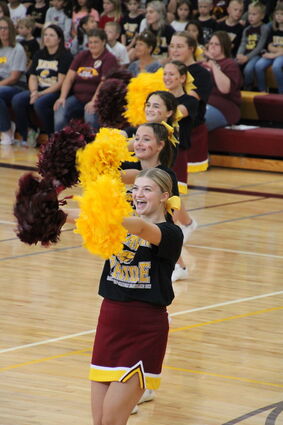 Homecoming at Hartley-Melvin-Sanborn was twice as nice last week. The marching band drumline provides the beat in downtown Hartley.

Not only did the volleyball team beat South O'Brien and win three pool matches at the GT/RA tournament, the football team blasted MMCRU 66-34 on Friday night. It marked the third district win by the Hawks and kept them at the top of the Class A District 1 standings.

Big wins may be the main headlines from Homecoming week, but they weren't the only stories.

A pep rally on Friday drew a big crowd of students and community members eager to root on the Hawks. With new Queen Abby Kunzman and King Kooper Ebel reigning over festivities, hordes of Maroon and Gold-clad H-M-S fans then hit the streets in downtown Hartley for a parade featuring floats from both students and local businesses.

With school spirit at sky-high levels, the Hawks took the Royals to the woodshed later that evening to wrap up a memorable week with a statement win.