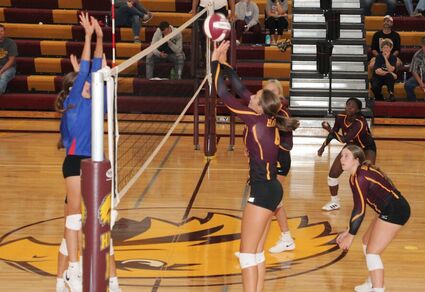 Abby Kunzman pushes the ball toward the opposing court. The senior had five kills in H-M-S's 3-2 win over West Sioux.

The ebb and flow of the first three sets of Hartley-Melvin-Sanborn's volleyball match on Sept. 8 indicated a positive trend line for West Sioux. But prospects soon brightened in a big way for the home team, who dominated the final two sets to claim a 3-2 win.

The momentum shifted as often in each of the first three sets as the final outcomes.

"I felt like our girls were trying to do the right things, but we just couldn't pull away from West Sioux. At times we were just over anxious and leaving...