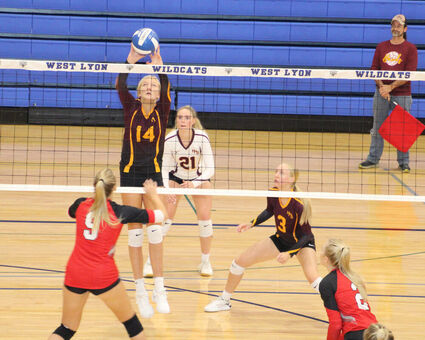 Kylee Schiphoff prepares to send the ball back across the net during H-M-S's opening match at the West Lyon tourney.

Hartley-Melvin-Sanborn opened the 2022 volleyball season at the usual place and came away with a familiar result on Aug. 23. The place was the West Lyon tournament and the result was a 1-2 record in three matches.

H-M-S came close to getting its first win against Akron-Westfield. The Hawks earned a 21-16 win in the first set and the Westerners returned the favor in the second. Akron-Westfield then won the tiebreaker (15-10) to claim the match.

Four kills each by Abby Douma and Elise Haack, and four ace serves by Emily Mutombo helped H-M-S compete with the Westerners. The Hawks were active i...