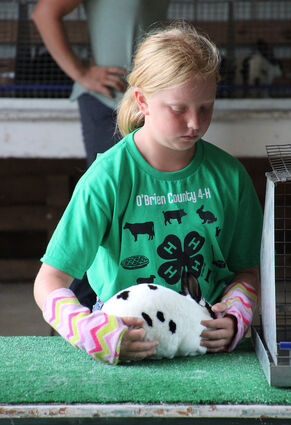 A participant in the 2022 O'Brien County Fair holds her bunny during the rabbit show.

The Iowa Department of Agriculture and Land Stewardship announced on Monday the first confirmed case of Rabbit Hemorrhagic Disease Virus Type 2 (RHDV2) within the state. The disease is not considered a risk to humans or other animal species, including cats and dogs, but it is highly contagious and deadly to rabbits.

The confirmed case is in Story County. The affected rabbits in this isolated case had not recently traveled to any exhibitions or fairs.

According to the United States Department of Agriculture (USDA) Animal and Plant Health Inspection Service (APHIS), RHDV2 is a viral disease...