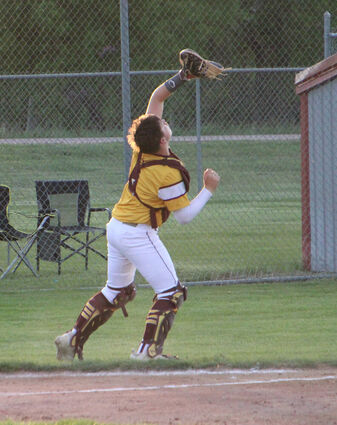 H-M-S sophomore catcher Jacob Cates opens his mitt in anticipation of a pop fly near home plate earlier this season during a game against Harris-Lake Park.

The sophomore, who was honorable mention all-conference in 2021, led H-M-S in batting average, hits, double, triples and home runs (tied), and also had the highest fielding percentage (.941) among regulars in the lineup.

Two other Hawks were named to the all-conference teams for the first time. Senior Jordan Ortega was named second-team all-conference and junior Trenton Vollink was honorable mention.

The number of players selected from each War Eagle Conference team i...