Doomed again by a big inning 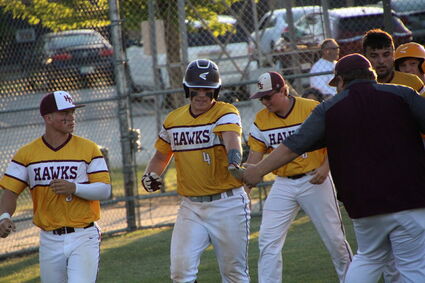 Jacob Cates is congratulated by assistant coach Jacob Riedemann after hitting a home run during the district baseball game Saturday at Algona.

The Hartley-Melvin-Sanborn baseball team may have felt as though they were in a time warp during the opening round of the Class 1A district baseball tournament. In an eerily similar inning to one they had a year ago in district play, the Hawks could not prevent their opponent from putting up a double-digit run total. That set the stage for Bishop Garrigan's 15-3 win July 2 at Algona.

The Hawks had the makings of a significant rally of their own in the second inning, when they loaded the bases on a singles by Jacob Cates, Nick Bronstad and Tyson Tessum. But a pair of strikeouts ended the thr...