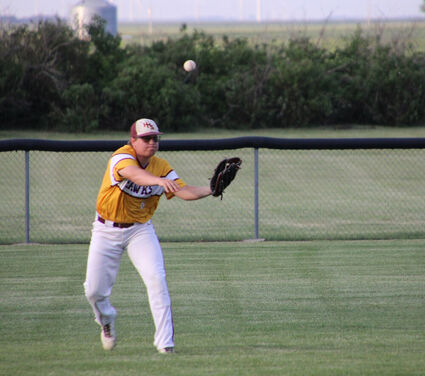 Leftfielder Keith DeBoer gets the ball back to the infield during action in the Hawks' 5-3 win over South O'Brien.

South O'Brien's first-inning lead was no stumbling block for Hartley-Melvin-Sanborn's baseball team, which came back to claim a 5-3 win on June 27 in Hartley.

Two hits and an error allowed the Wolverines to go ahead 2-0, but H-M-S answered with a pair of runs on singles by Tanner Tesch and Nick Bronstad. Jordan Ortega's two-run double in the second inning and two Wolverine errors helped the Hawks take a 5-2 lead.

"I was very happy with the way we responded after a rough top of the first," Hawk coach Jeremy Gloden said. "We were able to take advantage of some miscues."

Each team had a scorin...