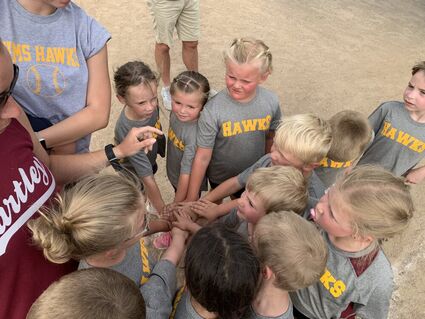 The 5 o'clock tee ball group in Hartley breaks down the post-practice huddle for the final time on June 30.

I've held several titles in my life. They run the gambit from professional ones like "reporter" and "news editor," to more personal ones like "dad" and "husband." This spring, I added "coach."

We signed up our oldest, Oliver, for tee ball this spring in Hartley. My better half suggested I volunteer as a coach, and several weeks of staring at the COACHES NEEDED ad in this very newspaper finally resulted in me joining on.

Lindsay Kracht and I were the only ones who originally volunteered to lead 35-plus tee ballers. Eventually, we were joined by Emma Vollink, Nick Stueben and Scott Wagner. Th...