It all came together 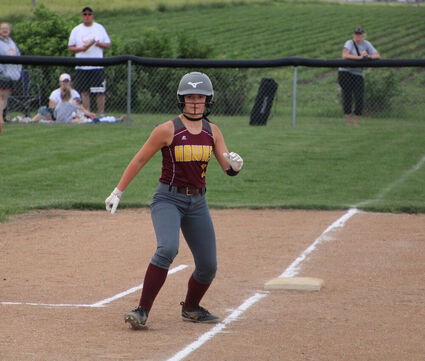 While Delaney Murphy exhibits her abilities with the bat at the plate, Hawk coach Stephanie Bronstad (background) displays her own hitting form.

It isn't often that a softball team can be out-hit and still win by seven runs. But that was the scenario in Hartley-Melvin-Sanborn's 9-2 victory over George-Little Rock.

G-LR had a 5-4 edge in hits during the June 21 contest in Hartley, but H-M-S took advantage of seven walks, two hit batters and errors to end a four-game losing streak.

"I wanted the bats to turn on a little more, but overall I'm happy with the win," said Hawk coach Stephanie Bronstad.

Gracie Knobloch's lead-off triple in the second inning was followed by run-scoring singles by Kinsey Schirmer and Bailey VerHelst. Delaney...