City to cut down trees in worst condition first 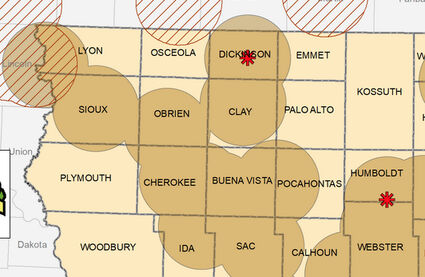 As evidenced by the large circles covering this map, only a few areas in northwest Iowa remain free of a confirmed EAB infestation.

Plans to deal with an impending invasion are continuing to form in Everly.

The city council on June 20 OK'd a plan that would treat two ash trees with pesticides at the park and water tower. The vast majority of ash trees on city-owned property won't be so lucky, as city Street Superintendent Nate Fitzgerald suggested they get cut down within a two-year time.

The council first began discussing local ash trees in April. The invasive emerald ash borer (EAB) was confirmed in Clay County this spring, and will eventually destroy most, if not all, of the ash tree population in town once it reache...