The month of June has been a winless one for the Hartley-Melvin-Sanborn baseball team, which extended its losing streak to 10 games last week.

Remsen St. Mary's, the top-ranked team in Class 1A, took the early lead and never looked back in a 15-0 defeat of H-M-S on June 13 in Hartley.

St. Mary's took control with a five-run first inning. They scored four runs in the second and third innings, and added single runs in the next two frames.

Keith DeBoer walked in the second inning to spoil the bid for a perfect game by St. Mary's pitcher Isaiah Gerrietts.

The Hawks' run total in their home game on June 14 was the highest all month, but it was not enough to avoid a 13-5 loss to Emmetsburg.

The E-Hawks built a 12-2 lead through 4-1/2 innings with a run in the first inning, six runs in the second, another in the third and four runs in the fourth. Two runs by H-M-S in the fifth inning prevented the game from ending via the 10-run rule. With the bases loaded, Nick Bronstad was hit by a pitch to drive in the first run and Tanner Tesch grounded out to add the second run.

H-M-S's first two runs scored on a first-inning double by Tesch. He also singled in the final run in the seventh. The E-Hawks also scored their last run in that inning.

Tesch finished with two hits and four runs batted in. Tyson Tessum hit a double and Trenton Vollink added a single. Bronstad was hit by pitch three times and walked once.

Gehlen Catholic scored their runs a little at a time against H-M-S to wrap up an 8-0 victory on June 15 at Granville.

After scoring twice in the second inning, the Jays scored a run at a time in the next three innings and then added three runs in the sixth.

H-M-S was limited to a double by Evan Eilers and singles by Jonathan Ortiz and Tanner Tesch. 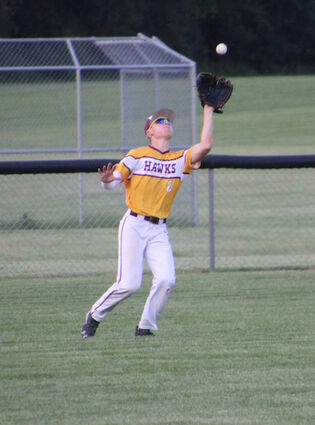 Centerfielder Ethan Diehm camps under a fly ball hit to him by a Remsen St. Mary's batter.

The Hawks suffered their third shutout loss of the week, falling to West Sioux, 15-0, on June 17 at Hawarden.

Jordan Ortega, Jonathan Ortiz and Trenton Vollink had the only hits for H-M-S.

The Falcons struck for 11 hits and 14 runs (nine earned) against Hawk pitcher Evan Eilers, who walked two and struck out two. Nick Bronstad gave up one run and one hit.

West Sioux broke out to a 4-0 lead in the first inning. They extended their lead with two runs in the second inning, four in the third and five in the fourth.