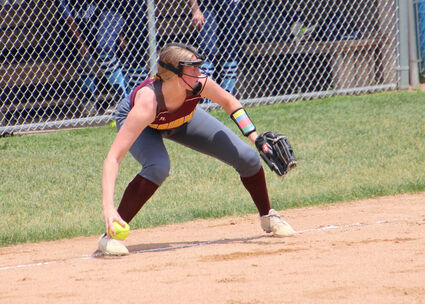 Abby Otto prepares to make the throw to third base in order to retire a Unity Christian runner in the game on June 10.

Akron-Westfield may have won the battle, but Hartley-Melvin-Sanborn put up quite a fight. Playing on June 6 at Akron, the Westerners (1A No. 13) needed three late runs to preserve a 5-1 victory in what Hawk coach Stephanie Bronstad considered one of the better games H-M-S has played against the perennial War Eagle Conference champions.

A two-run single in the second inning gave Akron-Westfield the lead, but H-M-S cut the margin in half in the fourth. Following consecutive walks to Gracie Knobloch, Kinsey Schirmer and Bailey VerHelst, Eliza Tewes singled to drive in Knobloch. The Hawks could...