Just 1 inning is the difference for Hawk hardballers 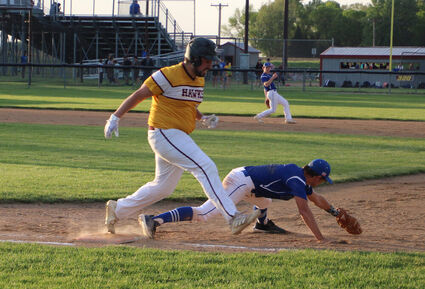 Jordan Ortega hustles to beat the throw to first base in the opening inning of H-M-S's game with Harris-Lake Park on May 27.

One baseball game was close and one game wasn't. In both cases, Hartley-Melvin-Sanborn came out on the short end of the score.

In action on May 26 in Hartley, H-M-S gave up the lead in the fifth inning against MMCRU and eventually lost, 6-4.

H-M-S struck first offensively. Trenton Vollink led off the first inning with a single, stole two bases and scored on a single by Jordan Ortega. After MMCRU tied the score in the second inning, Vollink again started things in the third with a walk. He scored on a double by Jacob Cates, who later stole home to add another run.