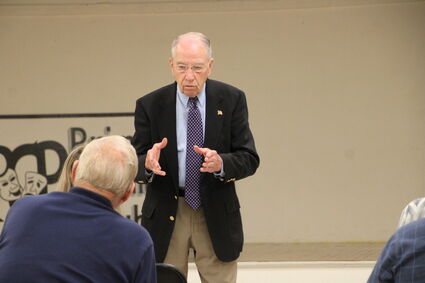 Grassley holds town hall in Primghar: Sen. Chuck Grassley hosted approximately two dozen citizens and members of the media during a town hall meeting on Tuesday in Primghar. The Republican discussed a variety of topics with guests, including inflation, gun laws, immigration, the 25th Amendment, abortion and partisanship. Due to a crunched timeline caused by the Memorial Day holiday, full coverage from Grassley's visit won't be published until next week.

Crops on the rise in Iowa

A few days of welcome rainfall meant Iowa farmers had 4.1 days suitable for fieldwork during the week ending May 29, according to the USDA, National Agricultural Statistics Service. Fieldwork activities included planting, cutting hay and applying chemicals.

Planting is almost complete, with 94 percent of I...