Stockpile of cornstalk bales is only loss 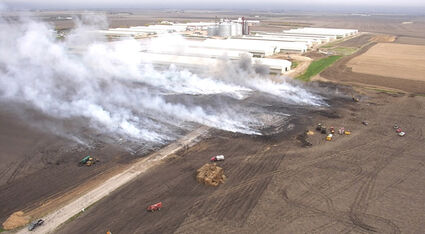 Smoke wofts in the wind during a cornstalk bale fire at Sunrise Farms last week. Firefighters were on hand at the blaze for 44 hours.

The air was thick with smoke between Harris and May City last week thanks to a fire that burned for nearly two full days.

Fire departments from May City and Harris were paged to Sunrise Farms' poultry facility on White Avenue around 11 p.m. on May 9. A large stockpile of cornstalk bales had caught fire, and it would wind up taking 44 hours before the final flames flickered out.

May City Fire Chief Nick Shaffer called it a "once-a-decade type of fire." Approximately 3,000 bales were lost during the incident, but no injuries were reported and no accidents occurred.