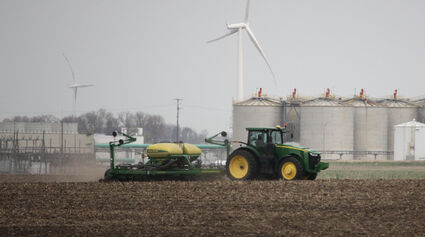 A farmer plants his field west of Hartley on Tuesday morning.

The saying, "Make hay while the sun shines," certainly applies to corn and soybeans.

Area farmers hit fields full speed over the past week thanks to beneficial weather conditions that finally allowed seeds to get into the ground. Planting season has been hampered this spring due to wet and cold weather that put off fieldwork for most of April, but busy fields have been the status quo this week as farmers rushed to get dirt moving and crops planted.

"It is amazing how many acres we can cover once we do get going," said Joel DeJong, a field agronomist with ISU Extension whose territory includes O'Brien County. "With larger planters, faster planter speeds or multiple planters per farm operation, we can likely surpass 2 million acres per day if conditions are right and time feels short."

Despite the noticeable field activity, progress remains behind schedule.

The delay is understandable considering weather trends. The department of agriculture also reported the stretch of unseasonably cold reporting periods continued through the first week of May with temperature departures ranging from four to eight degrees below normal across Iowa. The statewide average temperature was 51.3 degrees in April, 5.2 degrees below normal, with rain falling at all reporting stations. Pockets of slightly above average totals in west-central and eastern Iowa were recorded, though the remainder of the state experienced below average totals of nearly an inch along the Iowa-Minnesota border.

Overall, the Iowa DNR reported the month of April averaged 3.20 inches of precipitation across the state, about a half-inch below normal. The near-normal rainfall helped to continue improvement of drought conditions in Iowa. For the year to date the state is only about a half inch below normal; however, some areas of northwest and western Iowa received two inches below normal rain for the month. 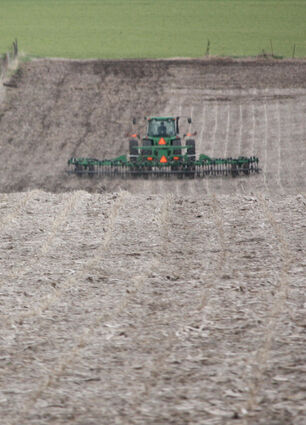 This farmer had plenty of work to do in his field south of Hartley on Tuesday morning.

The DNR also reported both soil moisture and groundwater levels are near normal across much of Iowa, but northwest Iowa remains drier.