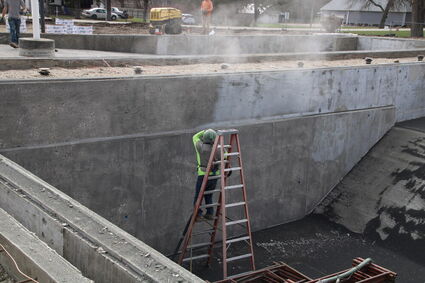 A worker sandblasts a wall in the deep end on Tuesday morning at Hartley's new pool.

As kids' attention shifts from classroom obligations to lazy summer days beside the pool, construction crews are working at a fever pitch to make sure those daydreams become a reality in Hartley.

Work on the city's new pool entered its final month when the calendar flipped to May. Progress has made visible gains in past two months – the actual pool itself has been poured and several fixtures are visible throughout the structure. The pool's deck is slated to be poured this week pending cooperative weather, and other loose ends will also be tied off.

"I'm a little apprehensive when I look at the calendar, because time's going fast," he said. "Weather-wise, there hasn't really been anything holding things up. They've been able to keep moving along. When they haven't been able to work outside, they've gone inside."

A progress update meeting on Tuesday revealed a bit of bad news. Benz said the variable frequency drives that control the two pool pumps may get delivered late due to a supply chain issue.

"It doesn't sound like this project is unique in this regard as several projects that (pool contractor) Eriksen Construction is working on are having the same issue," he explained. "In the short term, Eriksen will be working with the electrical contractor to see if there is a temporary solution to this issue so as not to delay start up, if possible."

Staffing of the pool has been a point of discussion for the city council. Members recently upped the starting wage for new lifeguards from $8.50 an hour to $10 in an effort to attract more candidates.

According to City Administrator Erica Haack, seven lifeguards have been hired for the upcoming season. Two or three more are needed, depending on how much their summer schedules allow them to work. 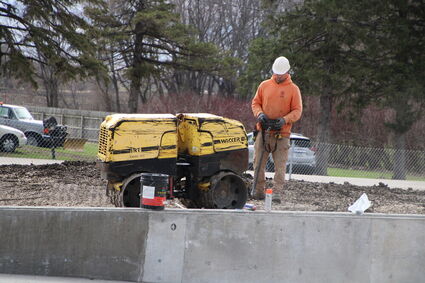 Fixtures like this fountain are now visible at the aquatic center.

Hartley's new aquatic center is being built at the old pool's location in Neebel Park. The square footage will be comparable to its predecessor.

Once constructed, the facility will include a zero-entry play area with a family slide, four swimming lanes, deep water diving and swim area, basketball hoops and a volleyball net, new bathhouse, and a large deck area with shaded zones.

The old pool was closed last summer to allow for demolition. Work on its replacement began last summer, and crews worked through the winter thanks to relatively mild conditions.