They could finally play 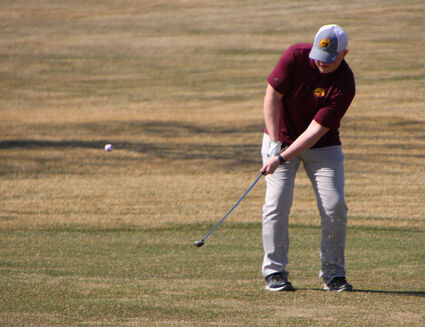 Wyatt Borden makes his approach shot during the Hawks' golf dual with Trinity Christian on April 21.

After having four of the first five meets of the season either rescheduled or cancelled, the Hartley-Melvin-Sanborn boys' golf team was able to host a War Eagle Conference meet on April 21.

Led by three players who finished among the top individuals, the Hawks claimed their first dual win of the season, 185-210, in action at Sanborn Golf and Country Club.

Trinity Christian's Alec DeBoer recorded the low round with a 39, but Nick Bronstad, Wyatt Borden and Jack Mastbergen of H-M-S each shot a 45 to round out the Top 4.

Other Hawks competing in the varsity lineup were Lucas Kroese (50), Spenc...