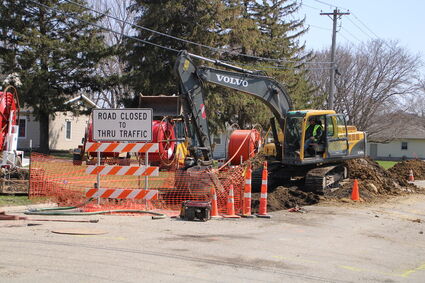 An excavator digs a splicing pit on Tuesday near the intersection of East Maple Drive and South Eighth Avenue East.

The dirty work is underway on a large infrastructure project aimed at improving the sewer system for residents in east Hartley.

Crews from GM Contracting, Inc., of Lake Crystal, Minn., arrived last week and began directional drilling for a new force main under Eighth Avenue East. The work is the first step in a project that will replace the sewer lift station that services homes in the surrounding area.

"Everything has been going pretty well and to schedule so far," said Hartley Superintendent of Public Works Jaron Benz.

According to Benz, GM Contracting is hoping to finish directional dril...