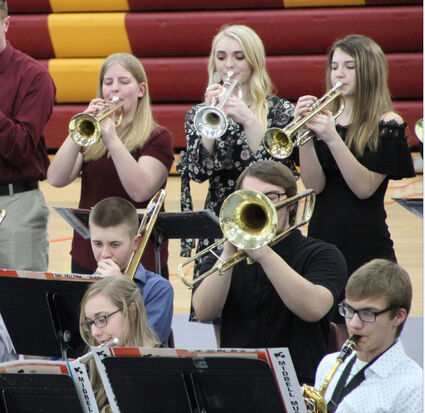 A maintenance fee for school-owned musical instruments and possible increases in admission prices to War Eagle Conference athletic events were discussed this month by the Hartley-Melvin-Sanborn school board.

Music instructors recently met with Superintendent Patrick Carlin to discuss charging a maintenance fee to cover the cost of instrument repairs. The fee would be charged to students who rent instruments from the school.

A sample form reviewed by the board suggests a fee of $70. Discussion was held on whether the amount would be capped at $70, and if the fee would be less if a student only rented an instrument for one semester.

"We have the same conversation with technology and Chromebooks," Carlin acknowledged. "Is it better to charge up front or try to get parents to pay for repairs."

One item on the sample form states that parents/guardians will be responsible for damages to or loss of a school-owned instrument "which is the result of negligence or vandalism on the part of their child."

The conference's constitution requires a quorum of school administrators to be present to vote on the matter. Not enough administrators attended the meeting on April 13.

The board also reviewed recommended increases in athletic officials' pay. Increases for varsity officials contracted by H-M-S are proposed to increase next year from $5-$25, depending on the sport. Class A District 1 sets the rate for varsity football officials.

Non-varsity pay will generally increase by $10 per official and the rate for junior high sports will be raised from $5-10.

Carlin noted the proposed increase in admission fees would offset the cost of higher pay for officials.

Board Member Chad Lyman asked if schools will move toward accepting electronic payment only for admission to athletic events. He noted that cash is not accepted for admission to state-sponsored postseason contests.

"It's not recommended, but I can see that it could happen," Carlin responded.

"It means less money handling and that may be a good thing," Board Member Ryan Haack said.

Information from the building principals included reports about interactions between high school and elementary students. The Child Development class prepared a learning activity which was presented to preschool students, and ag students demonstrated a simulation of cross pollination to second graders. Principal Ashley Benz said both presentations were beneficial to the students involved.

Seventy-five students in grades 2-4 participated in the Kids Heart Challenge, which raised $10,478 for the American Heart Association. Staff also donated $200 to the fundraiser.

"For a school our size, this is a huge amount of money," Benz said.