Golfers get first chance to compete 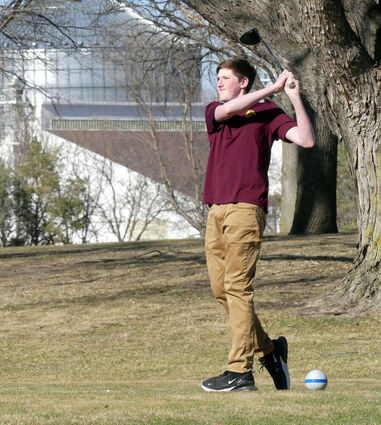 Lucas Kroese tees off in dual golf action against Remsen St. Mary's. Kroese shot a 55 on the course at Remsen.

After having two meets postponed the previous week, Hartley-Melvin-Sanborn's golf teams had their first taste of War Eagle Conference dual competition. The Hawk girls and boys took on Remsen St. Mary's at the Remsen Golf Course on April 11. 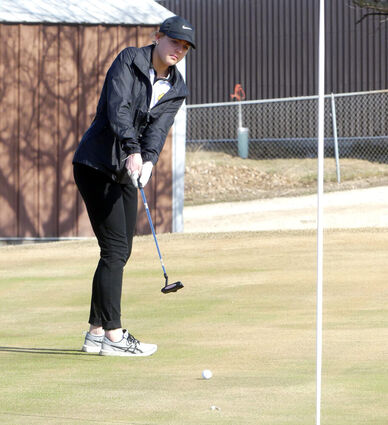 Kaley Pearson watches the ball roll toward the hole during the Hawk girls' dual meet with Remsen St. Mary's on April 11.

"It was good to get outside and finally get a golf meet in. With the weather the way it has been, we haven't been able to get out on a regular basis to play," said Hawk coach Cheryl Kroese. "Overall I was very happy with how the girls played."

The Hawk boys also lost to St. Mary's, 175-210. Jack Mastbergen recorded the low round for H-M-S, shooting a 49 to finish just outside the medalist list. Spencer McCarter and Charlie Conway each fired a 53, Lucas Kroese shot a 55 and Wyatt Borden finished with a 56.

"We did some good things up to the green. We need to continue to work on our approaches to the greens and our putting," said Hawk coach Mark Japenga. "We did battle and stay focused to shoot the best we could.

"The weather has prevented us from getting out on a consistent basis to work on our short game and improve our course management," he added. "Hopefully within the next week we can get some quality time at the course."

The H-M-S boys will host Trinity Christian on April 21 at Sanborn.