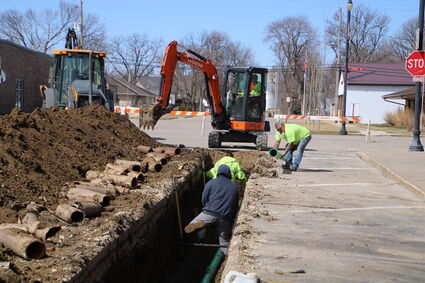 The large trench south of the Stoplight Lounge on Monday was shortlived, as a crew from the city had the sewer main replaced and dirt filled in by Tuesday.

An infrastructure improvement project in downtown Hartley yielded quite a hole on Monday.

A crew from the city spent the better part of a day removing cement and digging out a sewer main under a portion of First Street Southeast directly south of the Stoplight Lounge. The old clay tile was replaced with completely new plastic pipe to improve the flow of wastewater from the bar and restaurant, which had experienced instances of backup during the past four months.

According to Superintendent of Public Works Jaron Benz, the old clay tile was in bad shape with some parts of the floor missing in spots. The line was replaced quickly, however, and the large trench was refilled and the street reopened by Tuesday. Benz said the surface would be restored when the city's street contractor is in town this summer to complete other work.

Street Superintendent Rusty Howard noted Monday's dig was a "lucky" one. The crew uncovered an old horseshoe from Hartley's early years while removing the old tile.