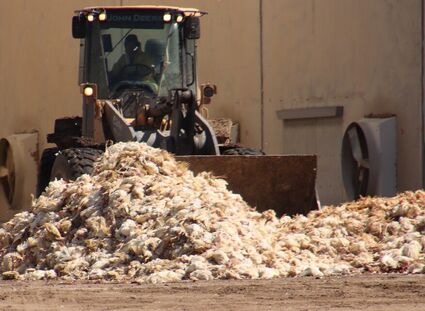 A worker pushes chicken carcasses with a tractor on Saturday, April 2 at Sunrise Farms south of Harris. According to the Iowa Department of Agriculture and Land Stewardship, approximately 5 million birds were destoryed because of a bird flu outbreak at the egg-laying facility.

A massive commercial egg-laying facility near Harris is sitting vacant for the second time in seven years thanks to an outbreak of bird flu.

According to Chloe Carson, communications director at the Iowa Department of Agriculture and Land Stewardship, 5 million birds were affected. All were destroyed, as per state and federal guidelines. She said regulations mandate the carcasses be composted or buried to reduce the risk of spreading of the virus.

Workers at the multi-building complex located north of Business Corner could be seen removing dead chickens throughout the weekend. The site was...