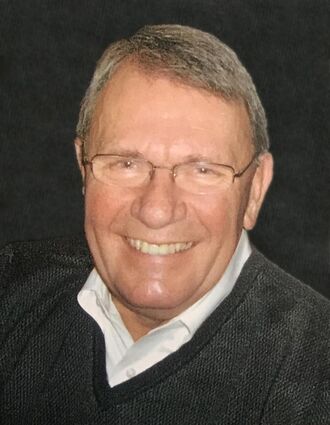 Keith M. Meyer passed away in the comfort of his home in Long Beach, Ind., on Nov. 17, 2021. He was born in Hartley on July 23, 1942 to Wilbert and Mildred Meyer, who precede him in death. He was a loving husband of 57 years to his wife, Marci, and a devoted father to his son, Rick, and daughter, Kristine, and her husband, Andy Lowes. He was Papa to his cherished grandchildren, Braden Michael (Viona) Lowes, Brooke Elise Lowes and Emma Anne Lowes, and great-granddaughter, Nora Annelise Lowes.

Keith grew up on their family's farm in Hartley. His father had great hopes that Keith would someday take over the family farm but Keith had other ideas. A math and business major, Keith was the first college graduate in his family, in December, 1963 from Wayne State Teachers College in Wayne, Neb. He actually never taught math until he retired from the business world. Instead, he was the only one from his college graduating class who was hired by IBM as a systems engineer in January, 1964. Keith retired from IBM in Chicago in 1987 as an Account Executive, leading a staff of 80 sales professionals worldwide for Amoco Corporation, which was then IBM's sixth-largest customer.

Following retirement, Keith decided to enter the classroom and taught middle school math in Greenville and McKinney, Texas for three years. Keith loved the students but he found that nine months of teaching was interfering with his golf game. This decision to give up teaching later led to a whole new career path, income tax preparation. Only working during the tax season would not interfere with golf and Keith, utilizing his math skills, became an Enrolled Agent with the IRS. His photographic memory, quickness with numbers, tax knowledge, honesty and respect for others served both him and his clients well.

Keith deeply loved and treasured his family and was extremely proud of their accomplishments. A Silver Life Master, he relished playing duplicate bridge with his favorite partner, Marci. He was an avid reader, enjoyed crossword puzzles, Words with Friends, all music, especially country, leaves table after table of bridge friends, and loved anything golf or football related. Win or lose, he faithfully followed the Nebraska Cornhuskers and the Dallas Cowboys. Many job transfers always brought new golf courses to play and over the years he belonged to eight different country clubs around the country. Among all of the players with whom he had the privilege of teeing it up in his lifetime, he also leaves behind a wonderful group of golfing friends at Long Beach Country Club and his 50-plus year friendship with the annual Alvamar Golf Tournament players.

Throughout his life, some of Keith's volunteer endeavors and memberships included serving on the Board of Trustees of Baylor-Richardson Medical Center, the Board of Directors of Cancer League of Colorado, chaired a school bond election in San Jose, served in various capacities in homeowners' associations where he has lived, helped recruit football players back in the early 70's for the Minnesota Gophers as a member of the Amateur Sportsman's Club in Minneapolis, and belonged to the National Association of Enrolled Agents. He was an American Contract Bridge League club director in Michigan City and Long Beach, Ind. and served on the Northern Indiana Unit 154 ACBL Board of Directors.

There is no way to count the lives he touched and no words to express how much he will be missed.

Cremation has taken place, with burial in Ridgeview Memorial Park in Allen, Texas.