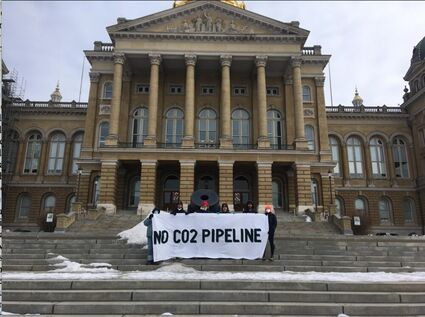 A group holds a banner opposing CO2 pipelines on the steps of the Capitol.

A bill that would have effectively killed a controversial pipeline project in Iowa died last week in Des Moines.

Senate File 2160, which would have gutted the Iowa Utilities Board's (IUB) power to grant eminent domain for projects of private companies, failed to pass out of committee last Thursday. Though it received bipartisan support in the subcommittee and was supported by many landowners across the state, the Commerce Committee canned it during "funnel week," when the Legislature cuts off debate for bills that have not made enough progress to get out of committee.

The Commerce Committee is comprised of 11 Republicans and six Democrats, and is chaired by Sen. Jason Schultz (R-Schleswig). SF2160 was introduced by Sen. Jeff Taylor (R-Sioux Center) in response to complaints from farmers and local governments in northwest Iowa regarding two proposed carbon dioxide pipelines that would cut across private property and require the use of eminent domain.

"The bill is dead, which is a disappointment to me," said Taylor. "More importantly, it's a defeat for landowner protection and constitutional rights."

More than 30 people attended a public hearing for the bill Feb. 15, many of whom were farmers. Around 100 were present via Zoom.

"Every person who spoke supported the bill with the exception of three lobbyists who represented the carbon capture hazardous liquid pipeline companies," Taylor said.

Sens. Mike Klimesh (R-Spillville), Herman Quirmbach (D-Ames), and Craig Steven Williams (R-Manning) moved the bill out of subcommittee on Tuesday after receiving a groundswell of comments in favor of its passage. However, on Wednesday, SF 2160 was pulled from the Commerce Committee agenda because it did not have the support it needed from other committee members to move forward. 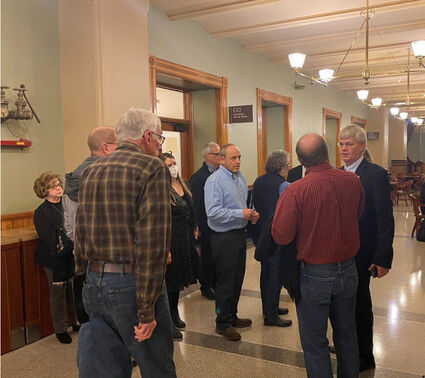 Taylor's bill was viewed as a trump card against two CO2 pipelines, one by Summit Carbon Solutions and the other by Navigator CO2 Ventures. If approved by the IUB, both projects would pass through O'Brien and Clay counties, and both companies would need to use eminent domain procedures if they fail to receive voluntary land easements from 100 percent of property owners along the route.

SF2160 received support from landowners affected by the pipelines as well as environmental groups like the Sierra Club of Iowa that oppose Summit and Navigator's projects. The boards of supervisors in O'Brien and Clay counties, along with several boards of supervisors in other counties, have sent letters to the IUB expressing opposition to the use of eminent domain for both projects.

Summit and Navigator are in the process of completing procedural steps with the IUB to gain approval. If completed, O'Brien County would have 97.05 total miles of pipe running through it while Clay County would have 76.21. Both projects are hoping to break ground within a year or two.