Heading back to Wells Fargo Arena 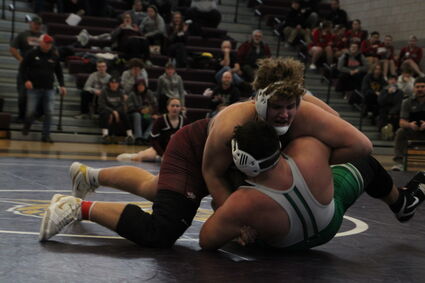 Mac Muller of Osage is about to be pinned by Okoboji/HMS's Nick Bronstad in the district semifinal match at 285 pounds.

For the second straight year, Nick Bronstad will represent the Okoboji/HMS wrestling team at the state meet in Des Moines. The senior from H-M-S earned his ticket to state with a runner-up finish at 285 pounds during the Class 2A District 7 meet at Webster City on Feb. 12.

Bronstad pinned Mac Muller of Osage in the semifinal round (2:37), advancing to the finals where he faced Daniel Chavez of Clarion-Goldfield-Dows. Bronstad had pinned Chavez in the title match during the sectional meet at Estherville.

In the district final, Bronstad fell behind 1-0 in the first period. His escape in the s...