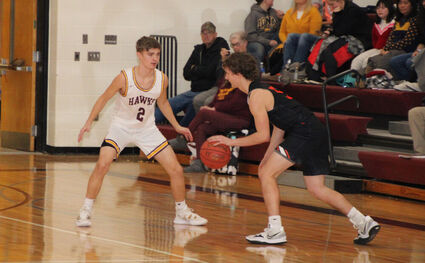 Mason Brinkman and a Sheldon player eye each other in this one-on-one matchup during the Hawks' 55-51 win.

Defense played a big role in ending the Hartley-Melvin-Sanborn boys' basketball team's four-game losing skid. Playing solid defense throughout the game, the Hawks held off Sheldon's late charge to earn a 55-51 win on Jan. 10 in Hartley.

"Our defense was the key all night. We defended hard all game," said Hawk coach Naet Hoaglund.

The Hawks matched their defensive intensity with a hot start on offense, leading to an 8-0 lead. The rest of the first quarter was a draw, ending with H-M-S out in front, 14-7. Sheldon fought back in the second quarter to force an 18-18 tie. Two baskets to close out the first half gave the Orabs their only lead, 23-22.

The lead changed hands twice early in the third quarter before back-to-back three-pointers by Travis Kamradt, who finished with 16 points, put the Hawks in front to stay. A three-pointer late in the quarter by Lance Berends, who led H-M-S with 19 points, started a 6-0 run that pushed the lead to 37-32.

H-M-S seemed poised to pull away in the second half but the Orabs came back to cut the deficit to two, once early in the third quarter and again with a minute to play. Kamradt made 1-of-2 free throws with 53 seconds remaining, but Berends put back the missed shot to make the score 53-48.

Hoaglund felt that sequence was crucial for the Hawks.

Kooper Ebel added two free throws with 33 seconds to play to put the game out of reach.

Ebel also scored 16 points and Keevyn Jacobsma added four. The Hawks made 50 percent of their shots from the floor and were 11-of-20 at the free throw line.

Hoaglund was glad to see the Hawks cut down on turnovers while stepping up their rebounding effort.

"I was happy with how we valued the ball offensively. Our goal is 10 or less turnovers, so to have 10 is a big improvement for us," he said. "We had 11 [offensive rebounds] and that's just a credit to our guys working hard on the offensive glass."

"We went through a little rough patch with four losses in a row. For our guys to stick together and keep pounding the stone shows a lot about their character and their resolve," Hoaglund said.