Not hitting the mark 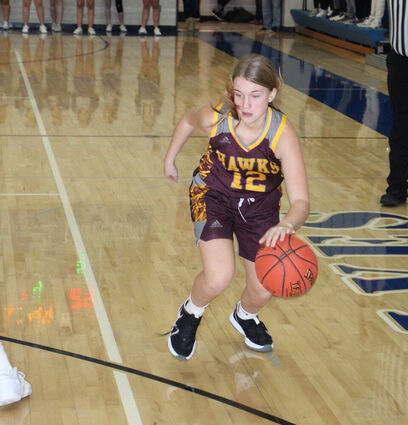 Gracie Knobloch has intentions of setting up for a shot attempt against H-LP. She scored five points in the game.

Statistics weren't impressive and neither was the point total, but the Hartley-Melvin-Sanborn girls' basketball team did enough to defeat Graettinger-Terril/Ruthven-Ayrshire, 38-37, on Jan. 4 at Graettinger.

The game was dominated by turnovers and fouls. H-M-S turned the ball over 28 times and committed 22 fouls. GT/RA's numbers were similar – 27 turnovers and 19 fouls.

The Hawks especially struggled to make foul shots, converting on just 4-of-18 attempts; the Titans were slightly better, making 10-of-22. The one advantage H-M-S had was in field goal shooting, as they converted 16-of-49 a...