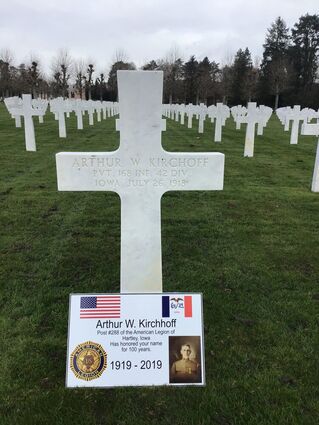 The Hartley American Legion post is named after Arthur W. Kirchhoff, a Hartley teen who died in World War I in 1918.

Members of Arthur W. Kirchhoff American Legion Post #288 were recently brought closer to a man none of them knew – Kirchhoff himself.

Past Post Cmdr. Cliff Ripke in November received photos of Kirchhoff's grave from friends Terry and Karolyn Collins, of La Crosse, Wis. Buried at Oise-Aisne Cemetery in Fere-en-Tardenois, France, the Hartley teen was killed in 1918 near Sergy while serving during World War I.

As far as Ripke is aware, nobody from Hartley has ever been to Kirchhoff's grave or seen photos of it.

"I just thought it was really nice to see where he was," Ripke said. "It was real...