Just out of reach 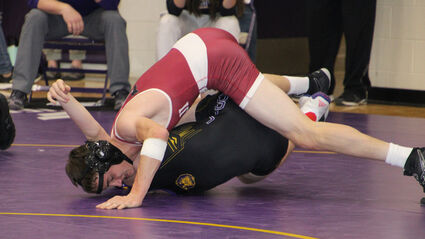 Bryce Dodge goes for the pin of Central Lyon/GLR wrestler Matthew Everhart during the double dual at Rock Rapids.

Wrestling fans who like dual winners to be determined in the final matches were in luck on Dec. 16 at Rock Rapids, as three Siouxland Conference contests involving Okoboji/HMS, West Lyon and Central Lyon/GLR were decided by a total of six points.

It started with the opener, as West Lyon and Okoboji/HMS battled back and forth until the Wildcats were able to prevail, 39-35.

To go one better, the Pioneers and Central Lyon/GLR ended their dual tied at 37-37. The outcome was determined by Criteria E, with the Lions receiving one point for having accumulated the greater total number of falls, def...