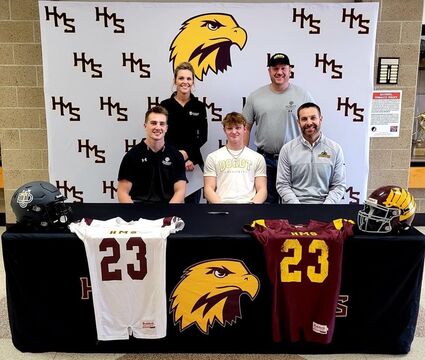 Among those joining H-M-S senior Connor Dodd as he signed his letter of intent to play football at Dordt University were his parents, Tammy and Chris Dodd, Dordt wide receiver coach Levi Jungling and head coach Joel Penner.

Hartley-Melvin-Sanborn senior Connor Dodd is one of 29 players on the initial list of recruits who plan to join the Dordt Defender football program this fall.

"Getting to national signing day is quite a process for our staff and for the young men who decide to make Dordt their home. We work hard to find world-class teammates who care about athletics, play great...