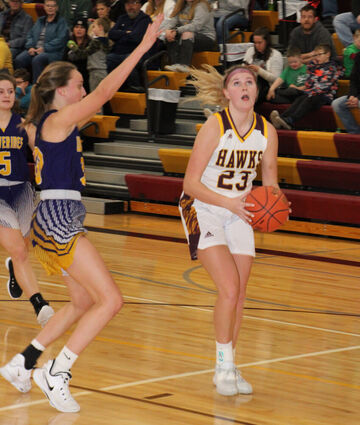 Senior Emily Otto has her eyes on the goal as she begins a drive to the basket against West Bend-Mallard on Dec. 13.

Scoring leaders were Lydia Harders with 22 points and Jasmine Lux with 10. Five others contributed a total of 34 points, including Abby Douma with nine, Elise Haack with eight, Kylee Schiphoff with seven, Emily Mutombo with six and Emily Otto with four.

Individual rebounding totals were balanced, as Harders and Douma each had five and Haack, Lux, Otto and Schiphoff each pulled down three. Lux also had four steals and two assists...