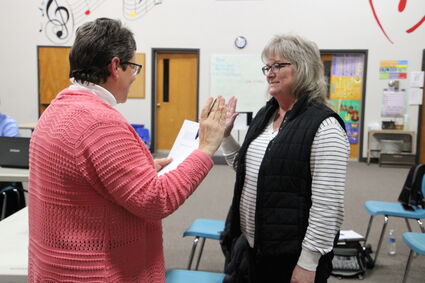 CC/E Board Secretary Diane White administers the oath of office to Barb Trierweiler (right) on Monday.

It doesn't take much to win elected office when nobody is running. Just ask Barb Trierweiler.

With three write-in votes, the Rossie woman won the Clay Central/Everly Director District 5 seat during the Nov. 2 election. She accepted the position without hesitation and was sworn in Monday night.

"I was not at all surprised," she said. "I was happy to take it, because I don't know who they'd get to fill it if I said no."

Incumbent District 5 Board Member Steve Kracht opted not to seek re-election this year after serving one term. Nobody else filed for the seat, leaving the position up in the a...