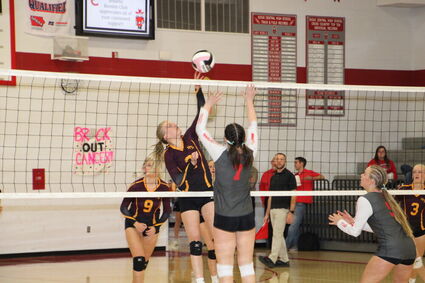 Kaley Pearson and Sioux Central's Alyse Terrell have their sights on the ball during the regional opener at Sioux Rapids.

Sioux Central was one win away from advancing to the next round of the 2A regional volleyball tournament, but Hartley-Melvin-Sanborn had other ideas. Coming back from a 2-1 deficit, the Hawks defeated the Rebels, 3-2, on Oct. 18 at Sioux Rapids.

A surge midway through the first set gave H-M-S the lead, but Sioux Central's late rally made the 25-23 final score seem closer than it was.

"We came out strong," said Hawk coach Cheryl Kroese. "We were passing the ball well and executing well offensively."

The momentum switched to the Rebels' side of the net for the second and third sets, leading t...