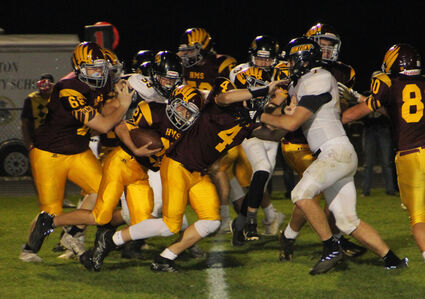 Aiden Espeland follows the block of James Gellerman during this running play. Espeland rushed for 90 yards in the Hawks' 61-13 win.

The aftereffects of a tough loss to the No. 1 team in Class A the previous game coupled with a week of Homecoming activities affected Hartley-Melvin-Sanborn early in its football game against Hinton. But the Hawks responded with 49 unanswered points to secure a 61-13 win Oct. 8 at Peterson Field.

The victory, coupled with South O'Brien's loss to Akron-Westfield, secured the District 1 title. It is the first outright championship for H-M-S since back-to-back crowns in 1996 and 1997.

Hawk coach Jay Eilers acknowledged the emotional impact of the loss to West Hancock and last week's show of "a...