Playing with their hair on fire

Everyone contributes to 66-14 district win at MMCRU 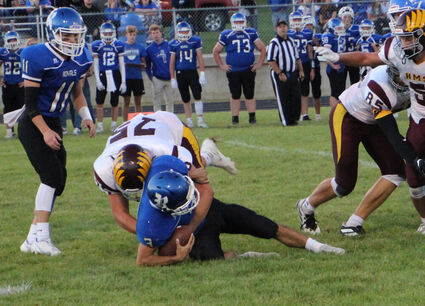 Nick Bronstad brings down Eban Hicks behind the line of scrimmage for a 5-yard loss in Friday's game with MMCRU.

Contributions in all three phases provided Hartley-Melvin-Sanborn with the winning formula in a 66-14 win over MMCRU.

In addition to eight offensive touchdowns, the Hawks scored on an interception return and used a long punt return to set up a score during Friday night's game at Marcus.

Hawk coach Jay Eilers pointed to preparation and mindset as keys to H-M-S remaining undefeated in Class A District 1.

"It was the week of practice. It was the process to get to the game," Eilers noted. "We talked and we're honest with our kids. I thought we were the superior team and it showed that we are. B...