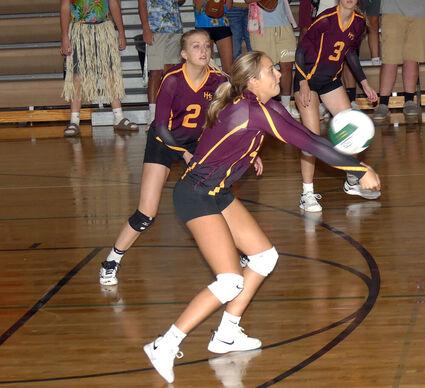 Abby Kunzman receives a serve for H-M-S during the 3-0 loss to Trinity Christian on Sept. 7 at Hull.

After not having won a set in six previous matches, Hartley-Melvin-Sanborn enjoyed a small taste of success during a 3-1 loss to West Sioux on Sept. 9.

The Hawks dropped the first two sets to the Falcons (13-25, 15-25) in the match at Hawarden, but fought back in the third to squeak out a 26-24 win. H-M-S could not sustain the momentum, however, and West Sioux was able to clinch the match with a 25-14 win in the final set.

Unlike their loss earlier in the week at Trinity Christian, the Hawks had plenty of serving opportunities (67). Individual servers were Abby Kunzman, 17-of-19; Kaley Pear...