No scoring punch in volleyball losses 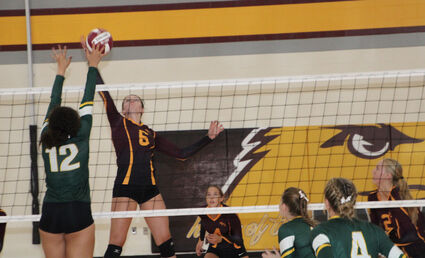 Jasmine Lux prepares to push the ball past Gehlen Catholic blocker Miyah Whitehead for a kill during the match in Hartley.

Unable to score points consistently, the Hartley-Melvin-Sanborn volleyball team struggled in a pair of 3-0 losses, including their War Eagle Conference opener.

H-M-S scored two points early in the first set, but only managed two more the rest of the way. The Hawks generated more points in the second set but were unable to keep pace with Gehlen Catholic. A brief flurry to start the third set gave H-M-S most of its points.

The Jays dominated at the n...