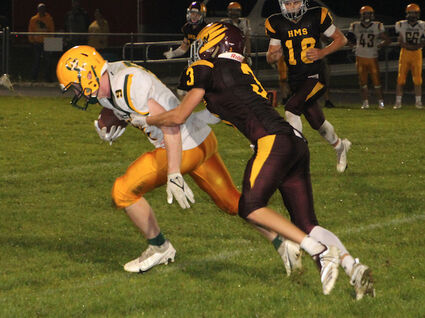 Defensive back Mason Brinkman prepares to bring down the Jays' Ryan Livermore during H-M-S's 44-33 win on Friday.

Friday night's game between Hartley-Melvin-Sanborn and Gehlen Catholic appeared to be one of those where the last team with the football would win. But the Hawks' rushing attack took over in the second half to secure a 44-33 win at Peterson Field.

The first quarter belonged to H-M-S, which scored twice to build a 16-0 lead. Connor Dodd's touchdown came on a 10-yard run and Mason Brinkman reached the end zone on a 13-yard reverse. Kooper Ebel ran both conversions.

Gehlen Catholic answered with scoring passes of 55 and 51 yards in the second quarter, cutting H-M-S's lead to 16-14.