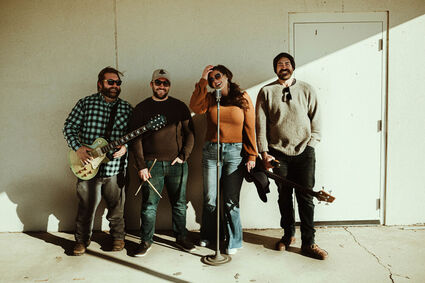 She's With Us has grown from a garage-based startup band to a well-known name throughout the region. Members pictured from left to right: Dane Zittritsch, Nate Shaughnessy, Iesha Toft and Whitney Thiessen.

If dedication counted in the Billboard Charts, She's With Us would be topping the rankings.

The band with ties to Everly and Royal has cultivated a loyal following in northwest Iowa and beyond. Created in 2015, the foursome has grown from playing gigs in local haunts to traveling as far away as Mason City, Sioux City and Lakefield, Minn.

For band members Iesha Toft, Whitney Thiessen, Dane Zittritsch and Nate Shaughnessy, it's all about putting in the time.

"If you don't play, you don't get good," said Thiessen. "We rehearsed for a solid three years before we got good enough and confident en...