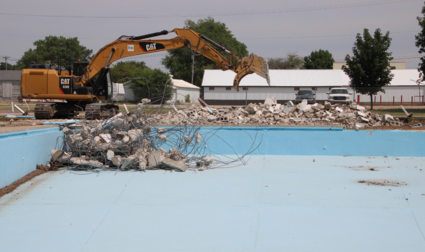 Hartley's former swimming hole is now just a hole in the ground.

The city's pool was completely removed as of Tuesday afternoon. Crews began tearing out all concrete and other infrastructure on June 23 to make way for the new aquatic center, which is hoped to be open by mid-summer next year.

"I think everything went pretty well to plan," he said. "Things are moving and coming along nicely."

A crew from Sioux Valley Construction – a subcontractor for Eriksen Construction, the new pool's main contractor – removed the existing concrete, some of which was a foot thick.

"Some of it was rotten and had been fixed over the years, but some of what they took was still solid and took up quite a bit of space in their truck," said Benz.

A crew of engineers will visit Hartley soon to survey the pool area and make a final plan before ground prep work begins. Sioux Valley Construction will complete general excavation duties, according to Benz.

The new aquatic center is being built in the same location at Neebel Park. The square footage of the pool will be comparable to its predecessor.

Hartley residents passed a $1.7 million bond measure in March to pay for the pool's construction. The rest of the $3.06 million price tag will come from donations and grants. 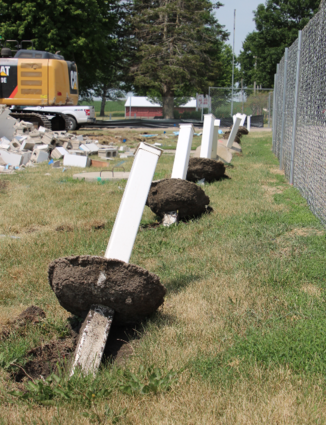 The site was completely cleared to make way for construction of the new pool.

So far, $158,000 of the $500,000 fundraising goal has been met. The pool committee is planning to auction off a quilt made by Helen Kuehl during Summer Celebration. It is on display at United Community Bank in Hartley this week and will be on a rotation to various local businesses throughout the coming weeks.

The raffle drawing will be held on Sunday, Aug. 1. The quilt is queen size, and tickets can be purchased one apiece for $5 or five for $20.

"Anybody that wants to donate, they certainly can," said Jackie Stoltz, a member of the Hartley Pool Campaign. "All donations are accepted. We are actively doing different things."

Stoltz and her husband, Keith, have been raising money for the pool since 2018 via the can/bottle deposit station in downtown Hartley. So far, it's raised $23,110.

"In the month of June alone, we had $1,400 worth of cans and bottles," said Stoltz. "I never would have imagined this [support] when we started."