One drought comes to an end 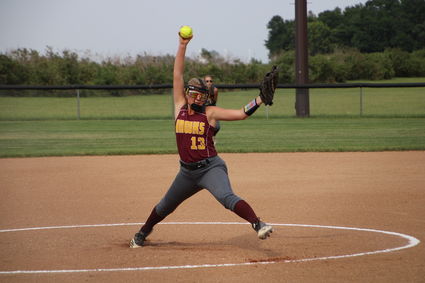 Pitcher Taya Mason winds up for a pitch against Gehlen Catholic on June 16. The senior struck out two Jays in the 12-0 loss.

Trailing by three runs and down to their last at-bat, Hartley-Melvin-Sanborn's softball team scored four times in the seventh inning to win at Emmetsburg, 7-6. The non-conference win on June 15 was the Hawks' first since the opening week of the season.

"The girls played a tough game. They battled each inning defensively and offensively, and never gave up," said Hawk coach Stephanie Bronstad. "We had a few errors but came back with the bats."

A first-inning run gave Emmetsburg the lead. H-M-S answered with Elle Mastbergen's solo home run in the second inning. Taya Mason followed that with a...